Droopy eyebrows may affect the whole appearance of the upper face, making a person appear tired or angry, while overly lifted eyebrows can give a person an unnaturally surprised look. Dr. Tansavatdi is a gifted facial plastic surgeon in the Westlake Village and Thousand Oaks area who has the ability to return the brows to a natural position that sits in harmony with the rest of the face and simultaneously minimizes creases and wrinkles across the forehead. As an outstanding facial surgeon, she can perform a forehead lift that will greatly improve your appearance.

What can brow lift surgery do for me?

Brow lift surgery is a forehead contouring procedure that restores the natural position of eyebrows that have begun to sag as result of aging. It ameliorates aging lines above the eyes and between the brows, thereby enhancing the beauty of the upper face, opening up the eyes and making an individual look more refreshed, awake, and younger. If you’re looking for excellent forehead contouring in Westlake Village, Thousand Oaks, and the surrounding areas, Dr. Tansavatdi is the ideal choice for you.

Brow lift surgery candidates must be in good general health without major medical conditions. The surgery can be done at any age. In order to minimize the potential risks associated with any surgery, Dr. Tansavatdi will carefully screen each patient’s medical history and facial anatomy and recommend the best course of action. If you’re near the Westlake Village and Thousand Oaks area and interested in a brow lift surgery, you may be an ideal candidate.

How is brow lift surgery performed?

There is a variety of different approaches for a brow lift, or forehead lift surgery. The right one for you will depend on several factors, including a patient’s hairline, anatomy, and the goals of surgery. During your initial exam, Dr. Tansavatdi will discuss which forehead lift technique is most appropriate for you, keeping in mind your specific physical attributes and personal aesthethic goals.

A direct brow lift removes the skin and muscle in the superior border of the forehead, just above the eyebrows. A small incision is made at the top of the eyebrow, where a small amount of skin and muscle are removed. The advantage to a direct brow lift is the fact that it provides the most amount of brow lift per millimeter of tissue being excised. The disadvantage is the visible scar after surgery, although those with “bushy” eyebrows will be able to hide scars more easily. A direct brow lift is a good option for older patients who seek to enhance their brows, as well as balding men who wish to raise their hairline.

A temporal (or “lateral”) brow lift is a procedure in which the patient has surgery on a smaller portion of the eyebrows instead of the complete brow area. The majority of the incisions is hidden within the scalp, with a small portion placed on the temples, predominantly within hair-bearing scalp (although some of incision may extend to non hair-bearing skin). Advantages to a temporal brow lift include less risk and a faster recovery time because it is a less extensive surgery which requires less dissection. However, compared to other brow lift techniques, the temporal lift achieves less dramatic results that typically last 3 to 4 years.

Many surgeons prefer the endoscopic brow lift procedure because it gives them the ability to view and carefully dissect tissue of the forehead through the use of a small endoscope which is typically attached to a camera. Endoscopic brow lifts also require smaller, less invasive incisions which help minimize discomfort, numbness, and recovery time for patients. During the procedure, multiple tiny incisions are made behind the hairline, with little to no skin being excised. The skin of the forehead will be repositioned and secured in an elevated position. This procedure is a good option for those in their mid to late 30s with minimal brow drooping of the upper eyelid.

What happens during the brow lift procedure?

Brow lift surgery is performed under moderate sedation or general anesthesia. Incisions are usually located above the forehead, along the hairline, and in some cases, on the side of the head. The placement of incisions will depend on the type of brow lift surgery performed. During the procedure, Dr. Tansavatdi will release the attachments of the brow to the underlying bone and lift the brow skin to a new position. The incisions are usually closed with sutures or staples, and Dr. Tansavatdi will apply a surgical dressing to the head. The procedure generally takes about 1 to 2 hours. Patients are free to go home the same day. A brow lift is also often performed in conjunction with a facelift with Dr. Tansavatdi. 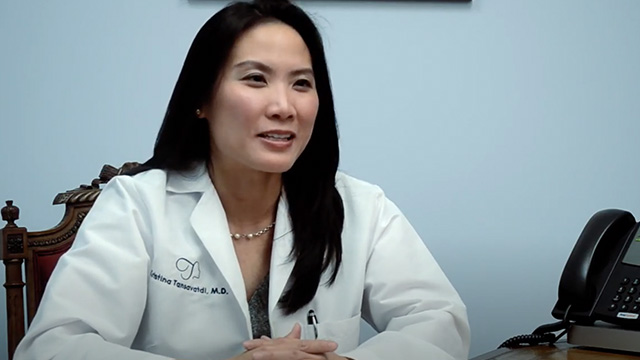 Initial recovery from forehead lift surgery may take 1 to 2 weeks, and surgical dressings during the first few days are common to prevent excess swelling. Bruising, swelling, slight headache/pressure, and nausea are all common within the first week. You may also experience temporary numbness in the forehead and scalp.

Final recovery is achieved within four months. Post-op instructions will be provided, and you will know exactly what to expect during every step of your recovery. We are also more than happy to answer any questions you have during your healing process.

If you’ve noticed that your brows are lower than they used to be and it’s is affecting how you feel about your facial appearance, a forehead contouring procedure from Tansavatdi Cosmetic & Reconstructive Surgery can help. Please contact Dr. Tansavatdi to learn more about brow lift surgery in Westlake Village. She will help you identify your treatment options for the best possible results. Besides Westlake Village, Dr. Tansavatdi performs brow lift surgery for patients in Thousand Oaks, Agoura Hills, Simi Valley, Malibu, Calabasas, and Santa Barbara. To schedule a consultation please call (805) 715-4996 or contact us online.